The Grape Barossa Grower Service Award was established to annually recognise the outstanding contribution of grape growers to their region, and as an opportunity to importantly acknowledge the voluntary service of those individuals. Nominations are made by their peers when candidates demonstrate values of dedication, leadership and a sustained period of service to their grape growing community.

This year’s recipient has a distinguished record of advocacy for Barossa grape grower interests. He operates with energy and passion – and with an integrity that is second to none in the Barossa grape growing community. He was a member of the steering committee that instigated the formation of the Barossa Grape & Wine Association in 2007 – a process which involved a great deal of time, effort and diplomacy … and a process which caused some anxious, sleepless nights for this fearless grower advocate.

Following the establishment of the BGWA, he was a member of the original Grape Barossa committee until 2010. He is also a Life Member of the Rowland Flat Ag Bureau, and he received the Baron’s Vigneron of the Year award in 1993. He has also been involved in mentoring young grape growers through the BGWA’s inaugural Next Crop leadership program. He is a fifth generation grape grower, but his first career was in banking which he undertook for 7 years. He bought his first Bethany property of 40 acres in 1975, and worked several farm jobs for 14 years while developing vineyards at home. He now owns 65 acres and – with a small staff – share-farms or manages another 100 acres, most of which he developed from scratch in the late 1980s.

He also established a contract grape harvesting business in 1988, which ran successfully until 2000.
Over the years he has constantly sought to advocate on behalf of the Barossa’s independent grape growers, and he has done this meticulously, with determination, passion and great integrity. He calls it how he sees it, and he is relentless in his quest to achieve the right result, whether it’s on behalf of his community or clients – or for his own vineyard.

Those who know him well say he is someone who will never let you down, and is always willing to help you out – particularly if there’s a West End Draught or schluck of port at the end of it!

A staunch advocate of the Barossa brand, he is proud to note that in the 2012 vintage his company sold grapes to 14 wineries that put ‘Barossa’ on their label. 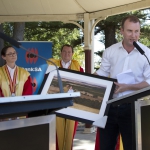 James March presenting Keith Hoffman with a stunning picture taken by Dragan Radocaj of Keith and Jen in the forefront of their prized Bethany vineyards. 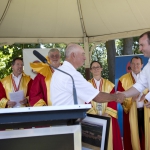 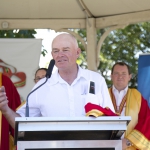 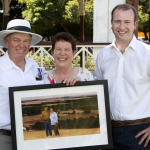 Full gallery of images from the 2013 Barossa Declaration of Vintage is available at flickr.com/photos/barossadirt

About the Author: Ashleigh Fox